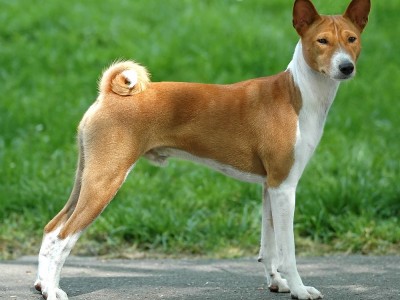 Some consider the Basenji to have terrier-like mannerisms because he is feisty for a hound. More often he is considered catlike in mannerisms: clever, inquisitive, stubborn, independent and reserved. His hunting roots are very evident, as he loves to chase and trail. He needs regular mental and physical stimulation, lest he become frustrated and destructive. Basenjis may be barkless, but they are not mute. They do make a sort of yodel, howl and shriek and occasionally bark, but just one or two fox barks at a time.

The Basenji is an active dog that needs daily mental and physical exercise. His needs can be met by a long walk followed by a vigorous game, or by running freely in a safe, enclosed area. He does best as an indoor dog with access to a yard. Coat care is minimal, consisting of only occasional brushing to remove dead hair.