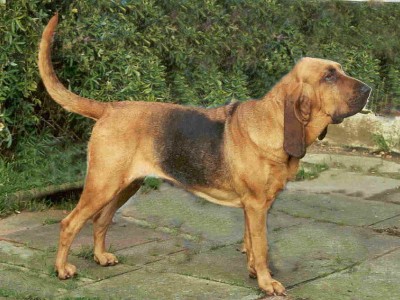 For all his calm manners at home, the Bloodhound is a tireless trailer once on the track. He is tough, stubborn and independent, yet he is so gentle and placid that he is extremely trustworthy around children. Nonetheless, he is not the lazy old hound dog portrayed in folklore but instead an active, playful companion. Although not the easiest breed to train for traditional obedience, he is exceptionally easy to train in tasks involving trailing. The Bloodhound can be reserved with strangers.

As a hunting hound, the Bloodhound needs a good deal of daily exercise. He was bred to trail through any hardship, and once on a trail he cannot be called off. He thus must be exercised in a safe area. The Bloodhound drools a lot, so his facial wrinkles require daily cleaning; the ear tips drag in food and must also be kept clean. The ear canals also need regular cleaning for good health. Coat care is minimal, requiring only occasional brushing or wiping. Most do best as indoor/outdoor dogs; note, however, that this is not the breed for people obsessed with cleanliness in the house!