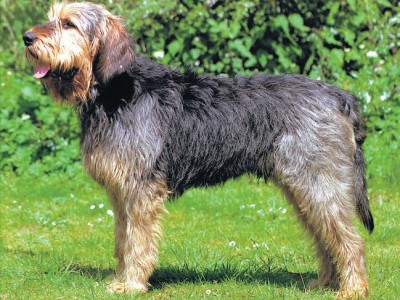 As a pack hound, the Otterhound is amiable with other dogs. As a hunter, he has an innate urge to follow the trails of mammals. Once on the trail, he is determined, single-minded and nearly impossible to dissuade from his task. Even though the Otterhound's job was not to kill his quarry, he will nonetheless give chase to small animals. The Otterhound loves to hunt, sniff, trail and, especially, swim. At home he is boisterous, amiable and easygoing (although stubborn), affectionate with his family, and quite good with children. Because the Otterhound was never traditionally kept as a pet, he is not among the most responsive of breeds. However, the Otterhound is a low-key dog that can function as a quiet companion.

The Otterhound needs daily exercise in a safe area or on a leash. He has a loud, melodious voice that carries for long distances. The Otterhound's coat requires only weekly brushing or combing. He may need his beard washed more frequently. Tidiness is not one of his virtues; the large, hairy feet tend to hold debris and mud, and the long hair around the mouth can hold water and food.