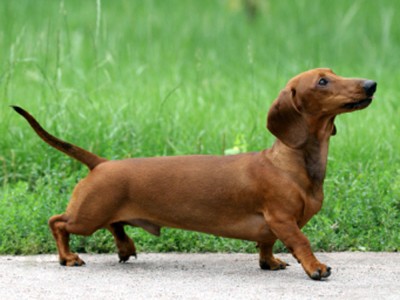 The Dachshund is bold, curious and always up for adventure. He likes to hunt and dig, tracking by scent and going to ground after game. He is independent but will join in his family's activities whenever given a chance. He is good with children in his own family. Some bark. The longhaired variety may be quieter and less terrier-like; the wires may be more outgoing. Some miniatures are more prone to be timid.

Although Dachshunds are active, their exercise requirements can be met with moderate walks on leash and games in the yard. The Dachshund is amenable to city life or apartment living, but he is still a hunter at heart and enjoys forays into the wilds. The smooth coat requires minimal grooming. The long coat requires brushing or combing once or twice weekly and occasional trimming of stray hairs. The wire coat requires brushing or combing about once a week, with occasional trimming of stray hairs and stripping to remove dead hair twice a year.