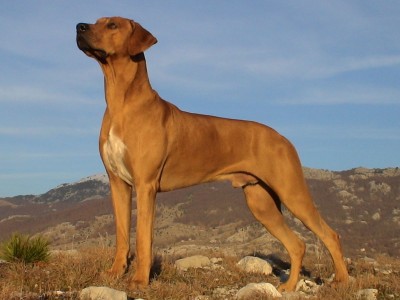 The Rhodesian Ridgeback is the hound group's answer to a somewhat protective dog. Not only is he a keen and versatile hunter, but he is a loyal guardian. He is good with children, especially protective of those in his family, but he is sometimes overly boisterous in play. He is strong-willed and powerful; some can become domineering.

The Ridgeback loves to run, and he needs daily mental and physical exercise to keep from becoming frustrated. He can be a good jogging or hiking companion. The Ridgeback is happier sleeping indoors and dividing his time between the house and yard during the day. Coat care is minimal, consisting only of occasional brushing to remove dead hair.