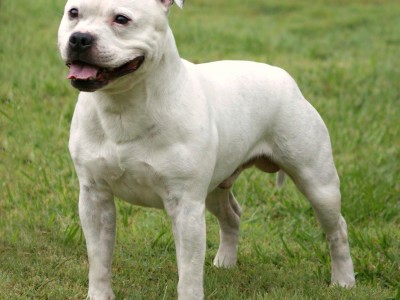 The Staffordshire bull terrier is a fun-loving character that loves playing with its family and friends. He is typically playful, companionable, amiable, docile and generally responsive to his family's wishes. his love of a good game is rivaled only by his need for human companionship. He is also characteristically friendly toward strangers. Some can be strong-willed. Although he doesn't usually look for a fight, he is fearless and tenacious. He may not do well around strange dogs. He is generally very good with children; although usually gentle, some can be rambunctious. In the United Kingdom the Stafford is known as the Nanny Dog, in reference to its eagerness and ability to assume the role of a child's nursemaid.

This is an athletic breed that needs a good walk on leash every day. He also enjoys a good game in the yard or a run in a safe area. The Stafford is a dog that craves human contact; thus, he is far better suited as a house dog. Coat care is minimal.